I have often said that no two hikes on the Appalachian Trail are the same. But what if you return to a section of the trail you hiked years earlier? Certainly that must be less exciting than the first time, right?

The truth is every hike is different no matter how many times you covered a particular part of the trail before. It could be raining this time. It could be winter rather than spring. You may be hiking with different people. The miles underfoot are perhaps familiar, but almost everything else is brand new. I promise.

The last piece I wrote was called A Shadow in the Corner. It was an ominous story about climbing to the summit of Bromley Mountain in Vermont only to encounter a situation that forced me to quickly alter my plans. I sensed danger and I decamped as quickly as possible from the place.

But last week I returned to the same summit to find the place warm and inviting. The ski cabin was much smaller than I remembered and the summit of Bromley was bathed in the warmth of a July afternoon with a cooling breeze cutting across the open land. What had been threatening, now was soft and friendly. Hikers walked around with cameras or sat here and there in small clusters eating a sandwich or some cookies.

Time had not changed the place at all. Time had changed me for sure as sixteen years is a long time in anyone’s life. No, my return to the summit of Bromley recalibrated my memory, altering the reality of the first visit with new images that modified what I had experienced before. The original experience magnified the size of the cabin making the man more dangerous in my mind than he actually might have been. But the rain, time of day and the fear than comes from being alone made the cabin and the summit itself a dangerous place for me and I carried that feeling over the years until it was refreshed a few months ago.

I recently hiked a piece of the Appalachian Trail in Vermont. I’d hiked it before—I’ve done the entire trail—but hadn’t been up that way for years. And I can’t say the Vermont section of the trail is a personal favorite, but I’ve had my moments.

Many years ago, when I hiked that same section of the trail—to the summit of Mt Bromley, a popular ski destination in the winter—I remember having begun late so I did not get to the top until twilight. My guide book had mentioned a ski shelter located near the trail so because several thunderstorms had rolled through during my trip up the mountain, I headed in that direction.

It turned out that the shelter was a large enclosed building. I entered into a spacious common room that was drenched in shadows as the light of day was waning outside. Suddenly, I realized I was not alone. Across the room lurked the shadow of human figure saying not a word. I said hello, not knowing if I was dealing with friend or foe. The figure began moving in my direction, but I did not have enough common sense to fear him. I was apprehensive, but most people on the trail are very friendly and open. My unavoidable “roommate” began telling tales of woe: He had lost his backpack; he had his car stolen; he needed to get off the mountain to attend church the next day.

I absorbed all of this, all the while trying to figure out if I would sleep a wink with my shadowy friend in the room. Ultimately, I decided that the better part of valor was to retreat out the door I had come through earlier and get further up the trail as fast as I could. I felt a little guilty about leaving the young man behind, but when you are alone on the trail it is often better to err on the side of prudence. I will never know what might have happened that night. But perhaps it is enough to know that “the wisdom of the prudent is to discern his way….” (Proverbs 14:8) The “way” in this case was not to stay. 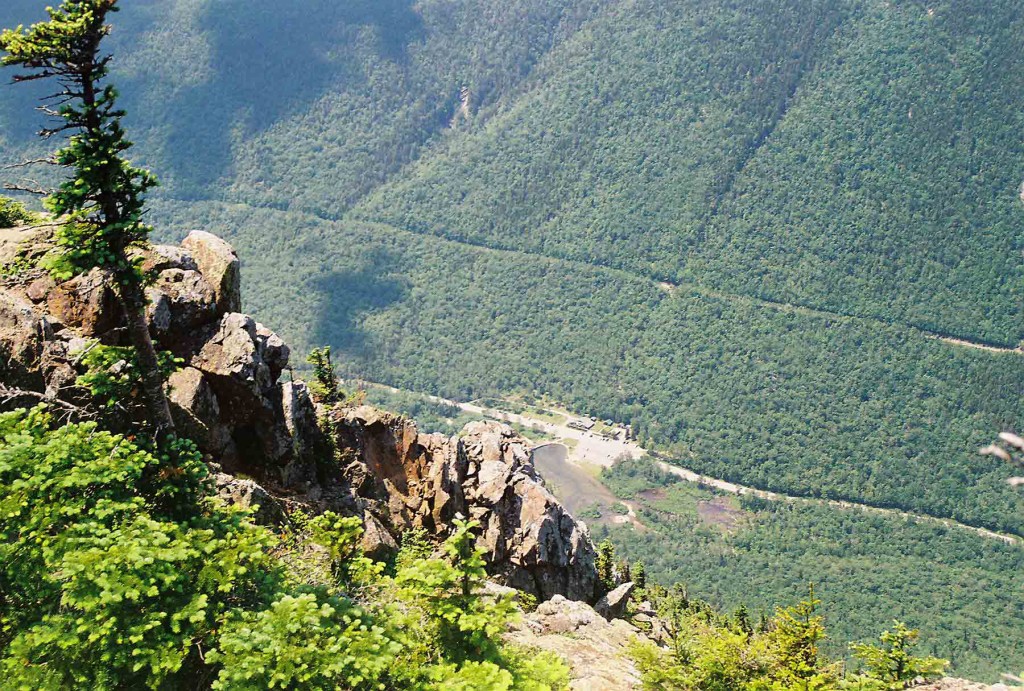 As the Appalachian Trail wound down Mt. Guyot to Crawford Notch, it took me past the Zealand Fall Shelter to beautiful Ethan Pond where I spent the night. Rain made the hike a dreary slog, but the next morning cleared and I descended to the Notch that had once been a magnet for travelers and tourists seeking mountain relief from the summer heat of Boston and other cities to the south. The first transcontinental automobile road, The Theodore Roosevelt International Highway (now #302), went through Crawford Notch. In the early years of the twentieth century, the area boasted four Grand Hotels.  Even in 1967, the Notch was still active with tourists, but the splendor of an earlier era had long vanished.

After crossing Route 302, the trail takes on a new character. It ascends the walls of Webster Cliffs on switchbacks.  The exposure is moderate, but as you rise above the Notch, you enter a new world: the southern Presidentials, a prominent range of mountains named for American presidents that is notorious for having some of the worst weather on earth. Its high winds can produce winter-like conditions even in summer.

I crossed Mt. Jackson with its rocky top and pushed on through the low-lying pines to Mt. Pierce (also known as Mt. Clinton) that provides some good views far to the north of Mt. Washington, the tallest of the range at 6,288 feet, and its weather and radio towers.

Shortly after descending Mt. Pierce, the trail rises again above tree line and remains in the open over the next eleven miles of the rock and bolder strewn Presidential Range.

I spent the night at Lake of the Clouds Shelter near Mt. Washington where I heard rumors of an off trail shack on the edge of King Ravine on Mt. Adams.  Later I would learn that the shack was Crag Camp. It had been privately constructed at a dramatic 4,200 feet in 1909 – the last of the high cabins – and was taken over in the 1930s by the Randolph Mountain Club. I was told that the camp could be accessed by the Spur Trail at Thunderstorm Junction below Mt. Adams. 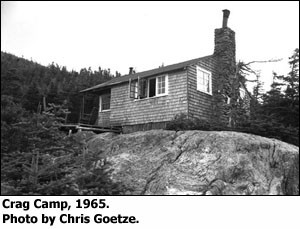 My ankle had been acting up, so I decided to detour off the main route and descend to the Crag. I arrived in the rain. When I pushed opened the creaky door, I entered a hazy blur of people and smoke. All eyes turned to me as I tried to decide whether this was a vision of paradise or something more ominous. Then someone said, “Come on in and close the door.” I did as instructed and entered a world of camaraderie and warmth that came to represent everything I treasure about the trail.

The difference between normal life and trail life is that on the trail everything is compressed. In our everyday existence, time is elastic; it can seem to stretch on forever, but on the trail, time is a stern companion. You track when the sun rises and sets and live consciously by the cycle of each day. Hikers delight in fair weather but struggle under blasts of pelting rain and gusting wind. As the environment changes, so do your companions: they appear and disappear with regularity. We may have our own agenda, but nature and the trail are the ultimate schedulers.

My stay at Crag Camp lasted two nights. I left behind nameless friends and powerful memories but I had to push on. I climbed back up to Thunderstorm Junction, hiked up the rocky side of Mt. Adams and then over Mt. Madison before descending to Pinkham Notch and the long journey back to my future. But the memory of Crag Camp lives on. In fact, I could not stay away. I returned to Crag with my son Alex in 1995; two years before, the old cabin had been torn down and replaced by a very different version of the camp. It still rested spectacularly on the edge of King Ravine, but the new building was nothing like the ramshackle cabin I remembered from 1967. In most ways it was much better – by AT standards the cooking, dining and sleeping facilities are now luxurious – but even so, the memory of those few days at old Crag keeps me coming back again and again. 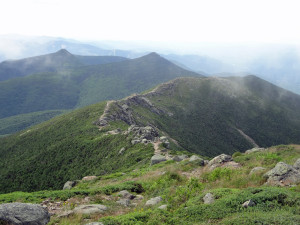 The Appalachian Trail from the South Peak of Kinsman Mountain twisted relentlessly down, passing Lonesome Lake with its fine views of the Franconia Range down to Franconia Notch. The Notch is a mountain pass running north-south with 4,000-foot Cannon Mountain to the west and the 5,249 feet of Mount Lafayette guarding the east. It is an impressive geological region, particularly when viewed from the road.

The trail heads east up 4,459-foot Mount Liberty and then cuts north over the narrow ridge that separates the Notch from the 45,000 acres of the Pemigewassett Wilderness to the east. The ridge is steep in places, but never dangerous and when the weather is good, the views are some of the best in the eastern United States. 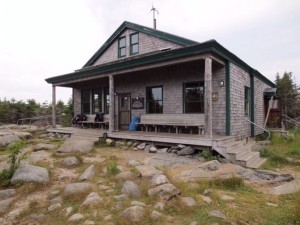 When I finally summited Mount Lafayette, I could have headed down to Greenleaf Shelter but decided to troop on to the next tent site near Mount Garfield, another 4,500-footer. This section from Lafayette to Galehead Hut is some of the roughest hiking on the entire Appalachian Trail.

I reached Galehead the next day and though the mileage was minimal, I was a bit tired. Luckily, I had choices: I could struggle up the 4,900 feet of South Twin with a full pack or I could spend the night at Galehead where I would get a bunk and be fed dinner and breakfast. While I had not been planning on staying at Galehead, the decision was ridiculously easy. I dropped my pack on the porch, found a nice bunk and settled in.

Often, the things a hiker remembers from the trail are the difficult or dangerous moments: A lightning storm, getting lost or even getting hurt. The normal daily grind of churning miles fades into the deeper recesses of memory. That would have been true of my Galehead stay, except for one thing that happened early the next morning.

The dawning light outside the window of the bunkroom suggested the sun would rise on a clear and mild mid-summer day. I lay awake in my bunk, savoring the moment and complimenting myself on the choice of staying at Galehead rather than pushing up to the summit of South Twin. Just then, I heard someone singing “Morning Has Broken.” I had not heard this song before (it was originally an English children’s hymn, “The Morning Song”), but from that moment the lyrics became imprinted in my mind and heart. Every time I hear it sung (usually by Cat Stevens) I think of that day in that place on the hike that would not end until forty-four years later.  Here is the first stanza from the actual hymn: 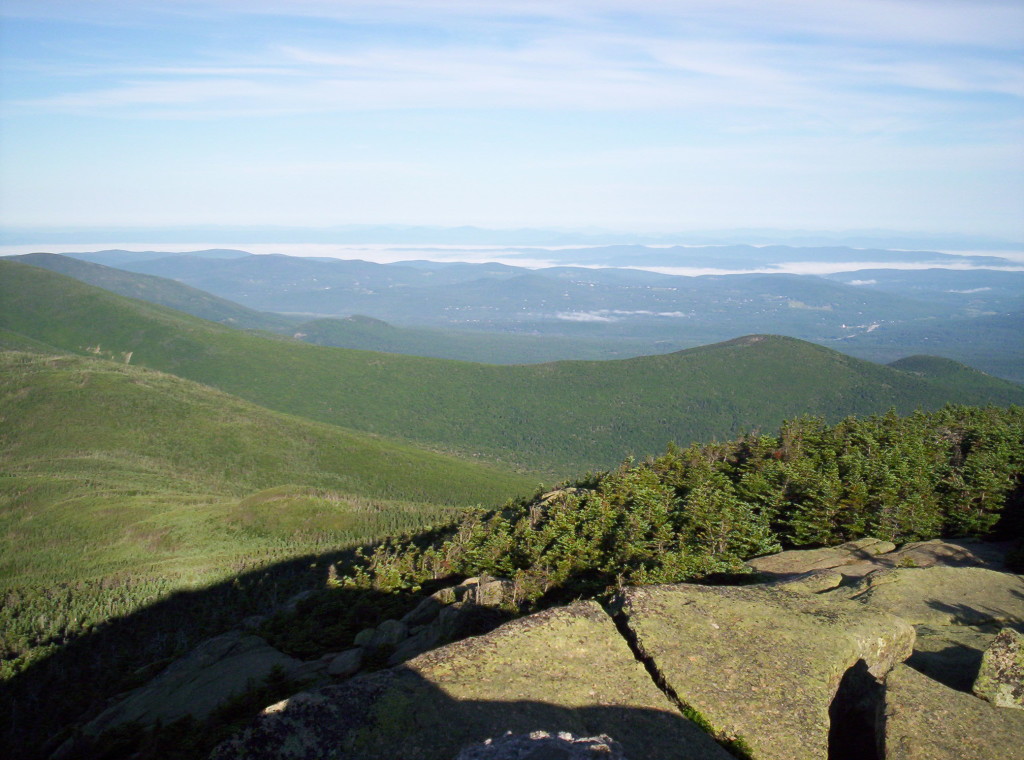